Some time has passed since the last issue of JP – and there have been some interesting developments on the cool Gamepark 2x.

Some time has passed since the last issue of JP – and there have been some interesting developments on the cool Gamepark 2x.

If you have read my review on the GP2x in last JP, you might remember my comprehensive moaning about the bad Amiga emulation, compared to the one of Sega’s Megadrive, which even runs full speed on an underclocked cpu – even though Megadrive and A500 not really differ in what they can, with most Megadrive ports even looking slightly better than on our wired girlfriend.

30-year old software developer Alister Roberts aka Critical from Harrogate, England, took his time to do a little workaround on his port of UAE4All and released the 0.6.4 version in November last year. Finally, it is possible to save to disk, which now is adding sense to playing games like MadTV or The Patrician that take longer than just a short round. Speed ​​has increased dramatically. Still it is necessary to overclock to max. 266 Mhz in order to play games like Turrican or Stunt Car Racer, but in that case they work perfectly at close to full speed, while it is possible to clock down during the game for not so cpu demanding parts.

“UAE4ALL is a work in progress…”

I had the pleasure to ask Critical, who is a member of the gp32x.com community, some questions about his project.

How come you produce an Amiga Emulator for the GP2x (gamepark) ? Do you have a feeling of obligation towards the Amigascene or is the reason rather the “because I can” type?

Critical: It’s very important to note that it’s not my emulator. It’s the work of many people who worked on UAE, and more recently Chui who produced the Dreamcast and Linux release that is uae4all. All I did was fiddle around with it so I could use it on my GP2X. I wanted to have an Amiga emulator because the Amiga was my favorite machine for so many years.

Novel: Which features will be added to uae4allgp2x in the future? What is the current state of development? Will there be AGA support and a possibility to use HDF files?

Critical: Well, the most requested features are save states and button remapping. I think those will happen this year sometime. I’m not really interested in AGA support. HDF support could happen.

Novel: Battery consumption was fairly high when I tested it. Will it be possible to code the emulation so efficiently in a sense that the processor can be underclocked at full speed, thus increasing battery time?

The emulator is the work of many people

Critical: The Amiga was a very powerful machine in its day, despite its relatively low CPU clock speed. If the drawing code was optimized for the GP2X, I think we could get quite a lot more speed out of the emulator, but these things take time. There’s always the potential to move some of the work to the other CPU too, although that’s far from easy.

Novel : Which other projects are you working on?

Critical: I bought a house recently, and I’m changing jobs next month. Essentially, I haven’t had much time to code for the GP2X (gamepark) for a while, but when I start my new job I hope that situation will improve over time, as it will provide a more flexible working environment.

Do you have any connections to the demoscene?

Critical: Of course I was often very impressed with the Amiga demo scene, but I never got involved. I used to write applications for the Amiga, and played lots of games.

Novel: Is there a favorite game of yours that you would like to recommend to the readers of Jurassic Pack for playing handheld?

Critical: My favorite games on the Amiga were Kick Off 2, Datastorm, Lemmings, Turrican II, Pinball Dreams, Lotus Turbo Challenge and Syndicate. Probably others that I’ve temporarily forgotten too. I’m not sure how many of them currently run on uae4all gp2x – it’s a work in progress…

Novel: Thank you very much for the interview! 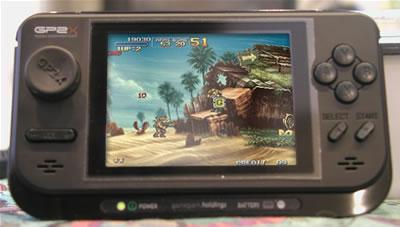 On the death of Depeche Mode keyboardist Andy Fletcher: “I'm the man in the background”